Well, I made a big boo boo.  I showed my blog to a bio family member.  It did not go well.  All they saw was anger and hatred, on my part.  Nothing at all of the pain that I’ve gone through.  They told me, repeatedly that I was harboring hatred, and that I hated my entire bio family.  I do not.  I don’t even know my entire bio family! ( that’s a joke)  I do know that they haven’t lived up to my expectations, but then again, I haven’t lived up to theirs either.

ISA, Infant Stranger Adoption changes everything about a family.  It removes a child, like surgery, and the wound that removal causes heals.  Scar tissue forms.  Life goes on.  When that person finds their family, no one knows what to do. There is fear, a lot of fear, on both sides.  Here are my mother, father, brothers sisters, aunts Uncles and cousins. but they are all strangers.  And I’m a stranger to them.

But, with ISA, there is also shame.  A kidnap is not voluntary, ISA is.  My parents made a decision to give me to strangers.  It was not random.  I was not taken.  There is guilt involved.

When I blog, there is usually a reason, a trigger.  I don’t do it that often.  The trigger is usually negative, something that made me feel hurt, and I use my blog as a way to get over it, to get it out of my system.  So, most of my blog posts are angry, or hurt, or mostly both.

That does not mean that I am angry all the time.  I’m just not.  I actually have a real life, full of good things.  I guess if you read my blog, that may not show.  My blog was written over years, but reading it all at once may be overwhelming, especially to someone who has lived a happy life.

Letting my family read it was a very bad idea.  They think I’m bad enough already.

I think I blew it again

I tried to reach a bio cousin.  I let her read my blog, hoping that she would understand me, and see that I was hurt by our family, but instead she told me I harbored scary hate and anger.

So that did not go well.

She said that the family decided that no one should contact me, ever again, because I’ve been mean.  I guess I have been.

I don’t know what to do now, or how to fix it.  I guess I can’t.  I found them 6 years ago, and it was never good.  I said things, they said things.  They told each other things, and decided to shun me.

I tried.  Maybe once you’re given up, you can never go back.

I just wish it didn’t hurt so much

This is your very first post. Click the Edit link to modify or delete it, or start a new post. If you like, use this post to tell readers why you started this blog and what you plan to do with it.

I’ve been thinking a lot lately about what makes a person good, or bad.

No one is all good, or all bad.  I think it’s a matter of perception.

I have been communicating with a paternal cousin, only through Facebook.  We have never met in person.  She is a few years younger than me, and grew up surrounded by our extended family.  I was touched when she said that she was sorry about what happened to me.  No one in my father’s family has ever expressed any remorse about my being given away.

I told her that I thought my father was a bad guy, and she assured me that her Uncle was not a bad guy.  He just made mistakes, and she was not going to judge him based on that.

That’s fair enough, but it’s a little different for me.  I am one of the mistakes that he made, and his choices affected my life in every way.  To me, he is the very essence of evil.  An entitled man, who liked to stick his dick in women (and sometimes children, if you count 14 yr old girls)  with no care at all for what his actions produced.  He left dead and abandoned children  in his horny wake.  He gave me the same amount of care that he would a tissue that he jizzed in.  Just throw it away, and don’t think about it any more.

I also shared that my father’s family does not speak to me, and my cousin told me that there had to be a good reason, because they were good people also, who would never turn on someone for no reason.

Maybe she’s right about that too.  Maybe they are good people, and I did something wrong.  I’m not the most diplomatic person in the world, after all.  I definitely said things that were very hard to hear, but what did I really, ever do to anyone, besides being born at the wrong time, to the wrong woman?

Where she sees good, loving family, I see cold unforgiving strangers.  We are blood  but I am different because my father put me outside of the family, and his blood is better than mine.

It’s all a matter of perception.

If my father is a good man, who made some mistakes as a callow youth, why does he still shun me and his grandchildren? Why doesn’t he try and atone for his mistakes?  Are these the actions of a good man?

Why didn’t he say anything to me when my mother died?  Does anyone know how much that good man, and his good family has hurt me?

If they are such good people, why can’t I see it?  Why are they hiding their goodness from me?  They seem to love each other, why don’t they love me, their cousin, their niece, their daughter?

Maybe it’s me who is the bad person, unable to forgive and forget.  Maybe that’s why I deserve this. 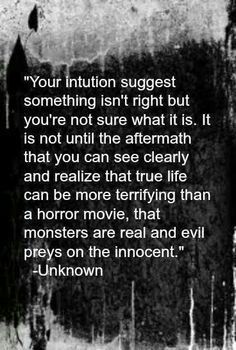